THIS IS MY FIRST MOD PLEASE ONLY CONSTRUCTIVE CRITICISM
K THANKS
-Newest update made possible by StewartIsMe! 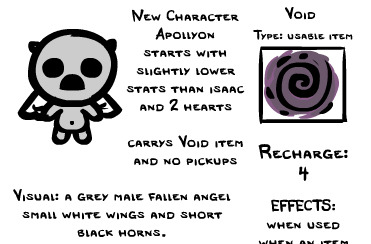 Hey all!
I'm sure you've all heard of the new character being added to Afterbirth+ ; Apollyon, the grey angel. So, I've decided to do what is in my power to recreate him in the current game we have.


WHAT DOES IT CHANGE?
It simply replaces Cain's sprites, starting items, etc. with that of Apollyon.


BUT WHAT ABOUT THE VOID?
The void is the new item, and the only thing we know for certain is that it takes 4 charges. I couldn't do much, so instead I decided to reskin + recode the Book of Revelations so that it only takes 4 charges, (totally op,) and is named and skinned how it should be. It still only gives you soul hearts. And, to make sure anyone with Cain can play him, the achievement requirement for Fate has been removed. But not the requirement to unlock Cain. That's still in place. Play the game a bit

APOLLYON'S STATS?
Apollyon starts with 2 full red hearts, no pickups, and the void. To recreate flight I've simply added Fate, which also grants an eternal heart*. The stats are the same as Cain's, as I feel they best represent the description; "Stats slightly lower than Isaac's." Now, I know what you must be saying, "But Cain has the same attack and speed as Isaac!" Now, hear me out. This character has very little advantage to have such low stats. (although, now that I think about it, flight and soul heart generation may be powerful...) ANYWAY! Changes can be made as they are needed. I feel like since we don't know what The Void does yet, we can't decide such a huge disadvantage in stats. If I'm proven to be incorrect, I will adjust Apollyon's stats to further fit that of Edmund's description.

*AFTERBIRTH*
Pretty simple, just take the files in the resources.zip and put them in Program Files (x86)\Steam\steamapps\common\The Binding of Isaac Rebirth\resources
It should contain a gfx folder, and 2 xml folders. I'm not sure if it is really compatible with other mods as it edits both players.xml and items.xml


Now, I believe I've covered pretty much anything. Graphical bugs with items that change Apollyon's appearance are expected since he has a unique skin color. Any other bugs or issues I would love to hear about. Thank you!

- A good person, StewartIsMe, fixed a graphical mistake on the character select menu! Thank you!

- Changes based on feedback, such as reducing the size of the resources folder and a small graphical change on my part for Apollyon's sprite, which involved a few pixels under his eyes that were left over from editing Isaac's sprites. Also made his teleport glow white instead of the grey it was previously.

Dictionary
This is available for afterbirth I tried.

mlodyrevciu
I could use your fashion to my FUTURE mod '' the Bining of Isaac + ''?
Because I want to post there all the things that will be in the DLC, including characters.

TheHolyDerp
the item details are out! go update it now

ineed2die
that wouldnt even be possible until afterbirth+ comes out.
literally.

Zonk
So this is going to happen?

Flip
In some form in AfterBirth +

mlodyrevciu
great mod, but could you \ you could change the effect of this item's '' Void '' for example. to a teleported ;D

Flip
Well, I could, but I don't want to change it until we're given its true effect.

Flip
Yeah, but as soon as we're given more info, I'll try to update it to fit what we know! Thank you!

TheHolyDerp
he did now! go check it out

Flip
Saw that, I have absolutely no idea how to code that... I'm no master.

Stewartisme
I really like the big book void texture.

you should only included the modified textures in the download instead of all of them. Also I edited the character select image a little because it was a bit blurry. http://i.imgur.com/CrXNqWF.png

Flip
Oh, I suppose I should, ahah! Thanks for the feedback and the cleared image! Do you mind if I update the select image and give you credit?

Flip
Don't mean to bother, but would you mind if I credited you for your select icon and used it?

Flip
Okay thank you! I'll credit you and update right away!

Maintenance complete! We have moved to a new web server! Speed and stability should be improved. If you notice any issues, please mention them in our Discord server.